Back in the early 90’s, when I was first designing my 20 inch telescope, I looked for a novel way of tracking the stars with a ball scope.  I knew of two past methods used by amateurs: Norman James’ floating equatorial tracking mount and Adrien Poncet’s equatorial platform, which had just been invented.  There was also Alphonse Pouplier’s robotic tracking system but it was a hand’s off system designed for small, wide field telescopes like the 4 inch astroscan.

James’ floating platform seemed a bad idea in a country like Canada where temperatures are below freezing half of the year.  Poncet’s platform held more promise but I wanted to see if I could improve upon the Poncet platforms’ two main limitations: resetting required every hour and each platform having to be made for a specific latitude.  After much thought and experimentation I came up with the idea of using a driving roller, inclined to the observer’s latitude, to drive a hemispherical mounted telescope.  I was sure this extremely simple idea had been done before but, to my astonishment, I could not find any example of this type of mounting, either in the English or French internet literature.

I first tried a single roller but had trouble stabilizing the mount due to my use of free turning hemispherical ball bearings as the idler supports.  I then switched to two drive rollers, which provided a much more stable drive platform and more friction.  One day when experimenting with the platform, I realized that by using two drive rollers I could also create a virtual declination axis if I allowed the idler ball bearing to move towards or away from the drive rollers.  Here is a sketch showing how the dual axis platform works: 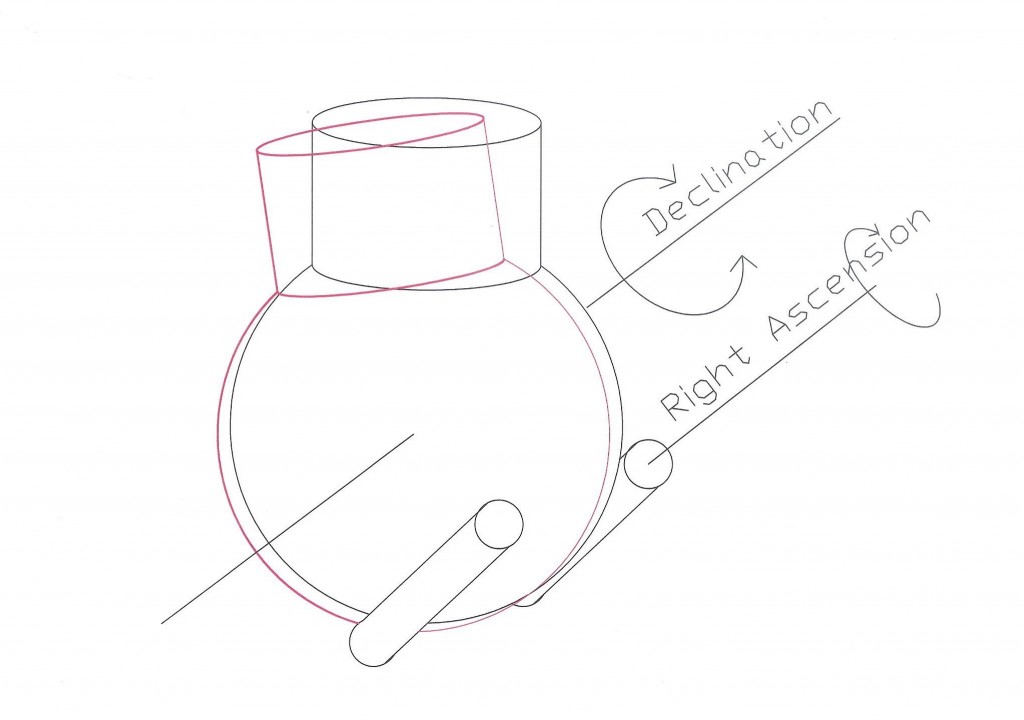 Here are two independent views of the movements as seen from the east and looking down the polar axis drive rollers: 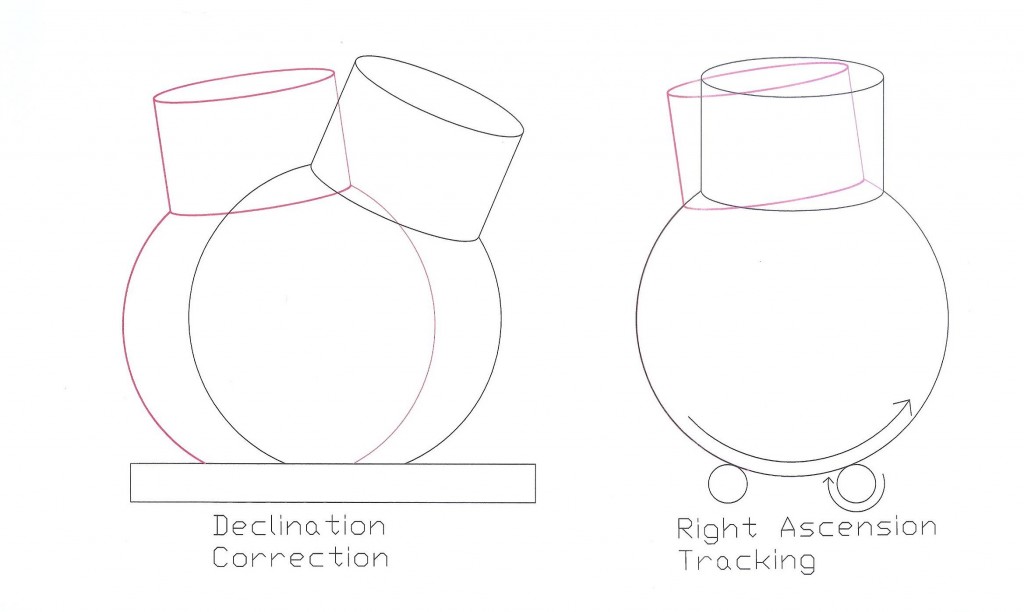 The declination correction clearly shows both a rotation and a translation. However, since the objects under observations are so far away, the translation part of the movement is invisible.

This dual axis drive “feature” works at almost any latitude.  Of course, like for Poncet dual axis platforms, the “declination” axis only works with minimum field rotation for objects near the meridian (line crossing the north and south poles) but, nevertheless, it provides the instrument with astrophotography potential.

I decided not to patent the idea.  This equatorial platform might have been a great idea in the ‘60’s and ‘70’s but in today’s age of computer controlled telescopes, I understood that a tracking but manually aimed telescope with no possibility of digital pointing was not going to be a money making proposal.  Obtaining and maintaining a patent is a very expensive procedure.  A promising business case must justify the trouble and expense.  It wasn’t and the passing years would prove me right.

Before attempting this on a 20 inch telescope, I built a 6 inch f/4 prototype mounted inside a fiberglass coated hemisphere (cardboard earth globe) I presented it at the 1995 Stellafane convention. 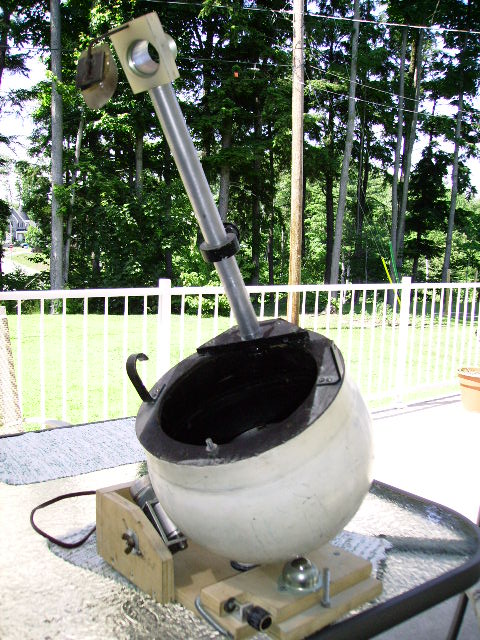 This would be the public disclosure that would both confirm my paternity over the invention while making patenting the concept impossible for me or anyone else in the future.  To my astonishment the prototype platform did not receive even a special award for innovation! I realize the prototype was crudely assembled: it was a breadboard, functional prototype but, nevertheless, it introduced a never before seen telescope making innovation, which should have been highlighted by the Stellafane judging committee.  Luckily, Roger Sinnot of Sky and Telescope making magazine was impressed when he saw the instrument at Stellafane and asked me to write a short piece describing it.  The piece was included in a January 1996 article entitled “The top 10 telescope ideas of the year”.  I had reached my goal: my concept would be made known to other ATMs and my vanity as the inventor would be satisfied and forever immortalized in the pages of this illustrious magazine.

Following the S&T article I was contacted by many ATMs interested in the idea, including the late Peter Smitka, founder of Mag 1 instruments, who was interested in using it on future Portaball telescopes.  Peter never followed through because of the necessity, he felt, of having ventilation holes drilled in the hemispheres of the telescopes he built, which would interfere with the drive rollers.  He would recommend the Poncet platform to his customers.

As far as I know, it took more than 10 years for another ATM to build an instrument using my concept.  Not having read my January 1996 piece in S&T, Oregon ATM Jerry Olton independently discovered the concept of driving a ball scope using a single drive roller.  S&T published several articles describing Jerry’s telescopes.  Jerry, whom I’ve had the pleasure of corresponding with on several occasions, has been a great ambassador for this type of mounting and has since built several instruments.  Both Jerry and I hope more amateur astronomers will discover the benefits of this mounting and build their own.