“The best telescope is the one you use most often” and “Necessity is the mother of invention”. These two phrases guided the principles behind the telescope shelter project described here. I live near Montréal, North America’s 9th largest city. My home in the northern suburbs is heavily light polluted (magnitude 4.2 at zenith on a good night) and surrounded by many trees yet, I concluded, this is the most practical location from which I am likely to do most of my astronomical observing.

Also, I’m a lazy observer. If it’s too complicated I’ll find many excuses to do something else.  I knew that if I were to use my latest creation, a 20 inch f/3.9 ball scope, more than a few nights per year, I had to make observing almost effortless (see here for a detailed description of this unique telescope).  I designed and built that telescope with portability in mind. With an Optical Tube Assembly (OTA) weight of 85 pounds it is relatively lightweight for its size. Its dual-axis equatorial platform can be easily and instantaneously picked up and moved around, whether the instrument, resting on the platform, is assembled or disassembled. The whole telescope can also be dismantled/reassembled in less than 5 minutes and rolled in or out of a hatchback car very easily.  All without tools.  It doesn’t get much easier than this. Yet, I knew it would not see much starlight, especially during the winter months if it did not benefit from some kind of permanent installation. The part of the world where I live gets a fair amount of snow. There is generally accumulation on the ground for 5 months, between early December and early May. Whatever shelter I built had to also take that into account.

So I set about building some kind of shelter. I considered the usual ROR (which I had built in the past) or Dome. Although my telescope is not a dob, it shares two characteristics of movement: the axis of rotation are near the ground (17 inches high for my ball scope) and, being a Newtonian, the tube swings in a fairly long arc: 5½ feet in the case of the 20 inch. A dome would have to be at least 12 feet in diameter and a ROR at least 12×12 feet. Also, for a dobsonian, it is better if the walls of the observatory are less than 2 feet high to allow the instrument to see fairly close near the horizon. Both of these classic shelters would be big and expensive to build. And what to do with them when you move?

After much thought I opted for a hinged cover design that would protect  the telescope when not in use, yet move out of the way with little effort when needed. We sometimes see “outhouse” type shelters that roll away but rarely ones that swing away. Rolling away may be an option in Florida, Arizona or southern California but here in Canada it’s useless half the year. Other amateurs have made hinged shelters before me but they seem rare. I find this strange because for a dob, this type of shelter is almost a perfect fit. One noteworthy example I remember was a counterpoised cover made by an amateur from Oklahoma in the Gleaning’s for ATM section of S&T (September 1970).

Here is a sketch showing the basic idea that I followed during construction: 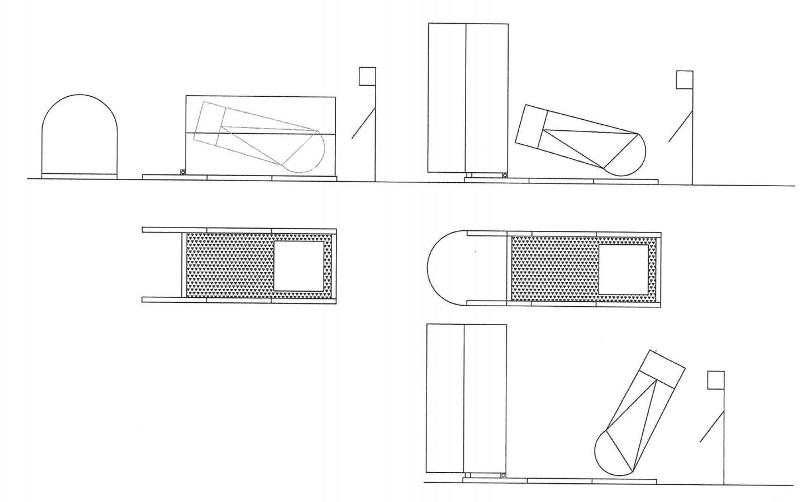 For low riding Newtonian telescopes, the advantages of this type of shelter over the ubiquitous ROR are many:

The cover is made of aluminium tubing covered with aluminium sheeting. It weighs about 150 pounds. It has a cylindrical top to prevent snow from accumulating. The sheeting I used was from an old, above ground pool. These pool walls normally support the vinyl liner. People get rid of them all the time, sometimes for free. They are often made of galvanized steel but mine is from an old pool that was made from aluminum.

The “foundation” around the periphery of the cover is not a single piece cast cement foundation. I wanted this shelter to come with me if I ever moved to a new house. A one piece foundation would have defeated that purpose. Instead, I designed a modular foundation made of inexpensive, pre-cast cement borders used for landscaping.

To learn more about the design and construction techniques used to make this small shelter, please click on one of the following links: