The hinges for the cover must be robust since they support the weight of the entire cover and they are down on the ground where it gets wet, snowy and dirty.  So the hinges I came up with are very simple but strong and designed not to rust.

The two hinges, located at the bottom end of the north section of the cover, one on the east side and the other on the west side are identical and must attach to two aluminium flat plates that are attached to the northern most cement borders that constitute the foundation.  Here is a picture of the western hinge with the cover closed: 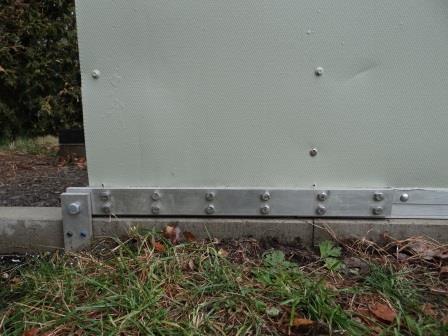 You will notice that 12 – 3/8″ Stainless Steel bolts secure the 24″ long x 2″ wide x ½” thick aluminium plate to the bottom frame of the cover. This may be overkill but I prefered to put more bolts than less, to ensure long term robustness of the assembly.

And here is a closeup of the western “hinge pin” which is simply a 2″ long, ½” diameter Stainless Steel bolt and Lock Nut. 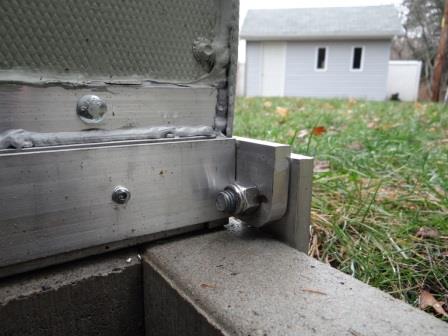 The Eastern hinge is very similar to the western one, except for one detail. Here is a picture: 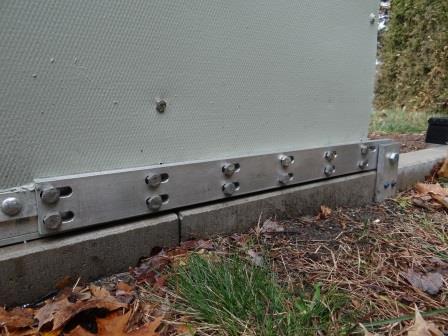 You will notice that I’ve slotted the attachement holes for the 3/8″ bolts. This was to compensate for an error I made early on in the project, when I was first assembling the foundation. Indeed, when I was laying out the eight cement borders, I made an error in positioning the western and eastern cement border rows, relative to each other. Instead of laying out an exact 45″ by 98″ rectangle, I ended up with a parallelogram. Since the bottom of the cover frame is perfectly rectangular, I couldn’t both, fit the cover to the base AND align the two hinge pins at the same time. There is approximately a ½ inch difference. If I had been smart I would have checked the squareness of the edges of the foundation before back filling but, I am not always smart. I could have dug out all the sand and soil, re-position the foundation and fill up again. Instead I chose the easier way of slotting the attachement holes on the eastern hinge plate, which took about an hour on my milling machine. The consequences are minor and if I ever move the shelter to a new location I will correct the problem when re-installing and slide the hinge plate attachements to their normal position.

When the cover opens it ends up resting on two stop butts. The stop butts are thick blocks of rubber called dock bumpers (see here for more details). They are normaly used on docks to prevent dammage to trucks backing up to the dock. Here is a picture of both bumpers:

And a closeup of the eastern bumper on top of which I’ve attached a supplementary ½” rubber “extension” (cut from a rubber mat) to compensate for the western hinge being slid ½” away from its normal position. 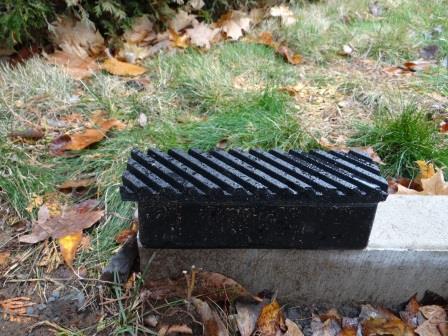