One of the things I appreciate the most about my 20 inch telescope is the ease with which it can be moved around, whether the instrument is fully assembled or collapsed.  Here is a picture showing how easy and effortless it is to move: 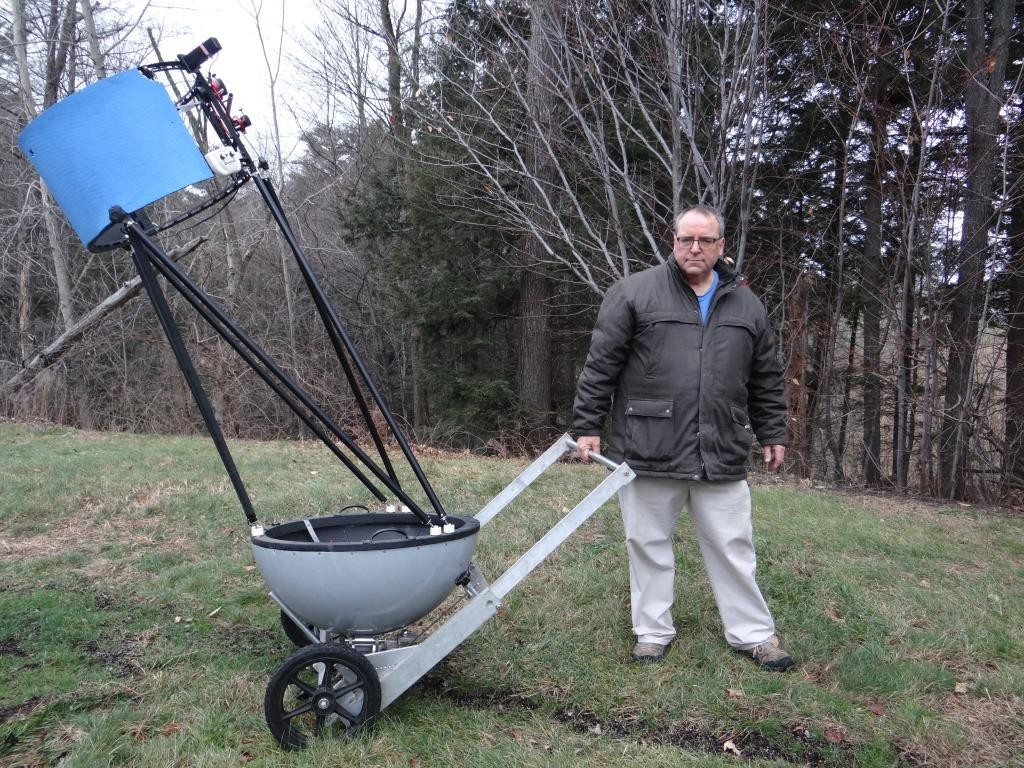 You will notice that, contrary to almost all Dobsonians equiped with wheelbarrow handles, I pull my telescope instead of pushing it. This picture clearly shows the center of gravity of the instrument is directly over the wheels.

Telescope transportation is accomplished through a number of features incorporated in the frame of the drive platform.  First, a retractable carrying handle nests inside the square, tubular side frame and locks in position, providing a leveraged arm with which to move the assembled or disassembled telescope. 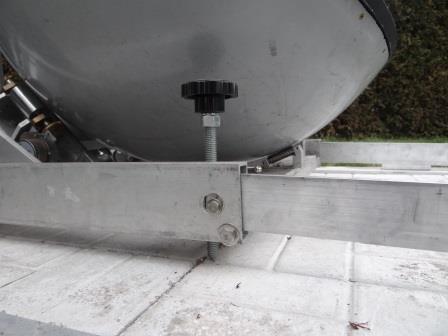 The bottom of the two side beams that support the scope during transport (equivalent to the wheelbarrow handles typically used in dobsonians) are milled and a bolt in the opening of the square aluminium frame (see photo, above) fits in the milled groove, preventing the two plates from accidentally sliding out of the tubular base frame. Here is a closeup of the milled groove: 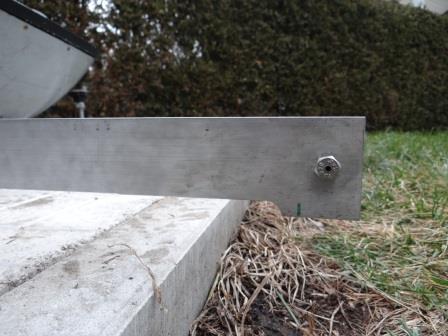 Connecting the two side handles is a 1 inch diameter aluminium tube which is what I hold onto when transporting the instrument. When the telescope is in position, the round tube is simply pushed back into the square tubular frame, out of the way but always immediately available if required.

Two 14 inch diameter lawnmower wheels permanently attached to the frame of the drive platform, behind the tracking motors, provide the rolling element to move the telescope around, even on uneven ground.  When the carrying handle is lifted up to about waist position, most of the weight of the telescope rests on these wheels, making moving the telescope very easy. 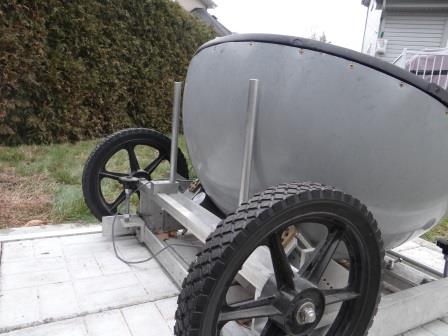 To prevent the tube from rolling off the platform, I also added two long and easily retractable aluminum rods that will catch the rolling hemisphere when it is inclined more than the latitude where the instrument is observing. VERY IMPORTANT TO NOT FORGET TO INSTALL THESE BEFORE TRANSPORTING!

Once taken apart, a roughly three minute operation, the dismantled telescope can be transported in almost any hatchback car, when the back seats are lowered.  As long as the trunk opening is at least 32 inches wide, 36 inches deep and 30 inches high, it will fit.  I regularly carry the telescope in my Toyota Matrix with a lot of room to spare.  I use two 3 inch wide aluminum channels as ramps to roll the telescope in and out of the car.  The ramps are attached to each other to ensure proper width, corresponding to the telescope wheel width.

The ramps lean on the car’s back bumper and the telescope is simply pushed into the back end of the car. In this picture, the scope is lined up with the small ramps, ready to be pushed into the trunk: 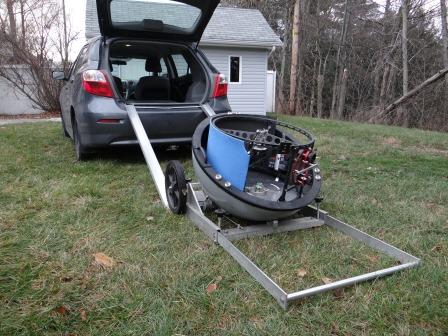 And here is a view of the same scene from the trunk end: 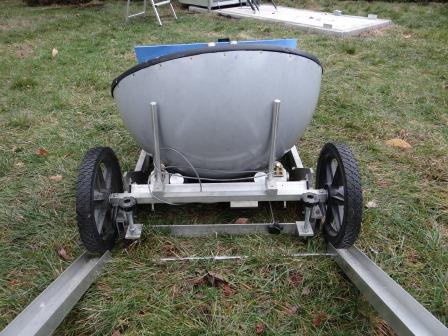 The next picture shows one of the wheels starting to engage with the ramp. You will notice the space between the wheel and the tubular frame is fairly narrow, just enough to let the 1/8″ thick aluminium channel slide by: 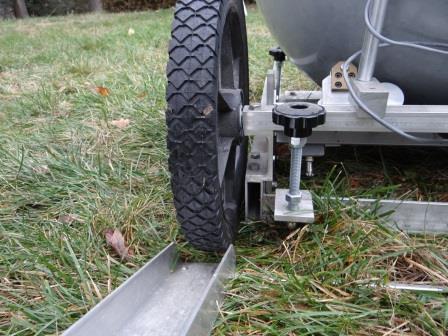 When all lined up, I simply push the 120 pound disassembled unit along the ramps and into the car:

It would be better/easier if the ramps were longer but with this length they get out of the way and easily fit in the car. I may someday make a sliding or hinged extension but for now they do the job. Another thing I must improve is to add little hooks that will prevent the ramps (and the telescope) from accidentally falling off the bumper, especially when unloading! 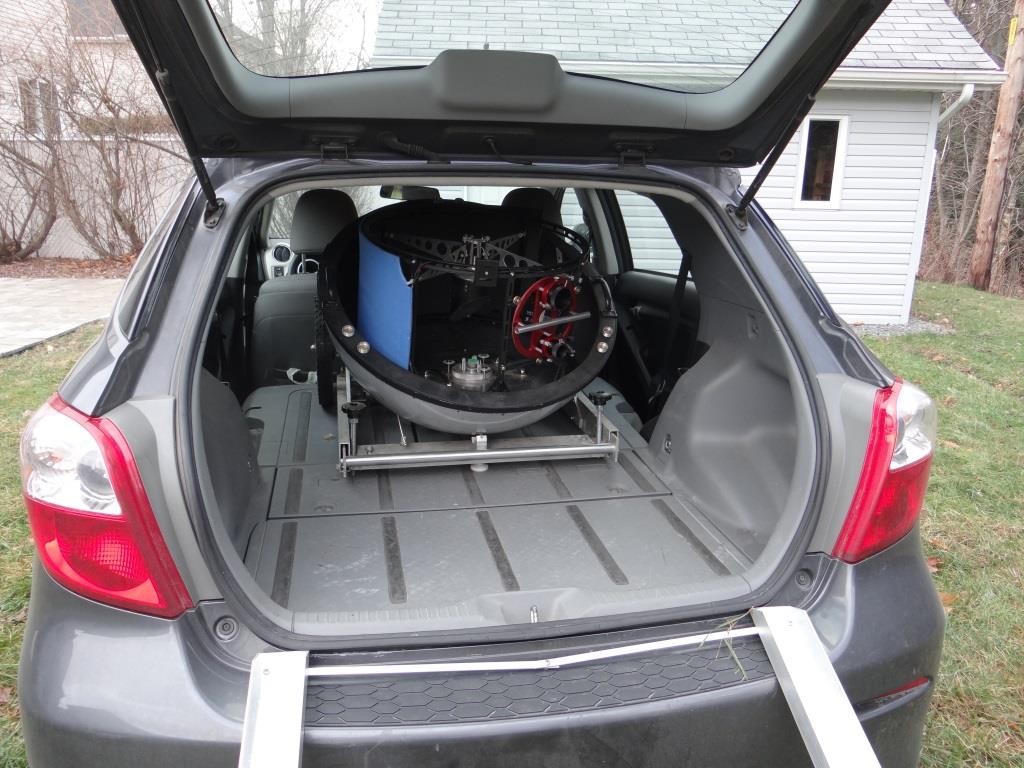 And with the small ladder, the ramps and the truss tubes loaded in the car. All that is missing is the eyepiece box and a portable 12V battery: 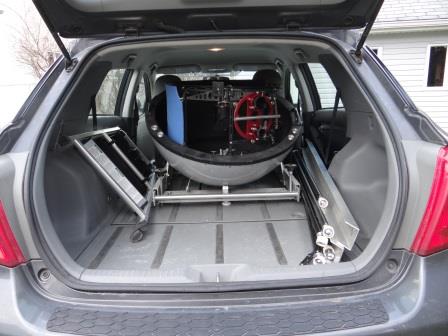 If rolling the scope on it’s platform is not possible for some reason (snow, stairs, etc.), the instrument can be moved in two parts. The optical tube bottom (hemisphere, mirror, mirror cover and 12V battery for dew heaters)  is equipped with two large handles and, without the UTA nested in it, it weighs about 65 pounds. 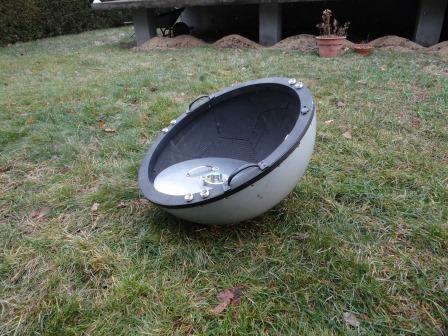 It is best transported by two people but by being careful, I can also lift it by myself. To lighten further, the 32 pound mirror with it’s attached 5 pound cover can be quickly detached from the hemisphere and transported by itself (something I try to avoid due to the long re-collimation procedure required)

Certain precautions must be taken when driving with the telescope in the car.  Unless the hemisphere is clamped down it will move (rotate) with each turn or slope you take.  Also it will move up and slam down on its drive and idle roller supports, eventually damaging the precious hemisphere. So in the car the hemisphere must be tied down to the base with elastic cords.