Now let me tackle the heart of the ball scope: the hemisphere. I had a lot of difficulty finding a 30 inch hemisphere in which to mount the optics. At some point I came to the conclusion that I would have to make it myself.  By the way I use the generic word “hemisphere” to describe the “ball” (as in Ball Scope) but in fact that word can describe anything from a true hemisphere (half sphere) to a 2/3 sphere (like most ball scopes use). Semantics aside, from now on I will use the the term hemisphere to describe any portion of a sphere used for a ball scope.

During construction of my 20 inch ball scope, two hemispheres were made. I will start by describing the first experiment, the “blue” hemisphere. This first hemisphere fits the expression “the operation is a success but the patient died“. I learned a lot building the blue hemisphere and developped the tools that would make the second hemisphere, the “grey” hemisphere, a success. But in the end I couldn’t use the blue hemisphere because it was to heavy.  I was aiming for an operational OTA of 75 pounds. Unfortunately the blue hemisphere weighed approximately 80 pounds empty. I put it aside (still have it) and found another manufacturing technique to lighten things up.

First, here is an early picture of the 20 inch mounted on the blue hemisphere: 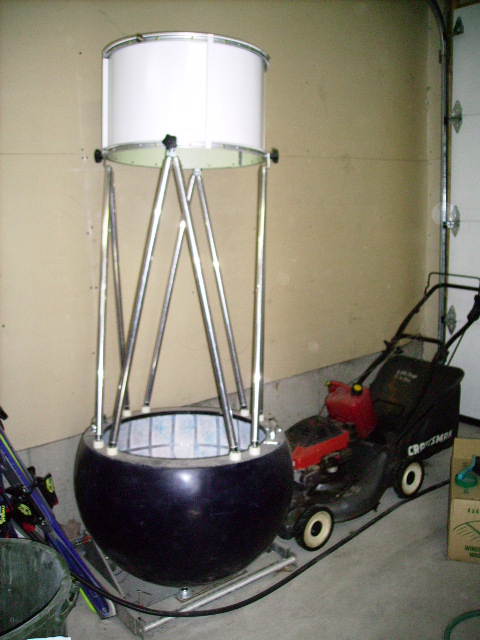 When this picture was taken the UTA was much heavier than it is today yet, the scope was still bottom heavy !   Here is a description of the construction technique I used to make that first hemisphere, which can be seen in the attached photographs: 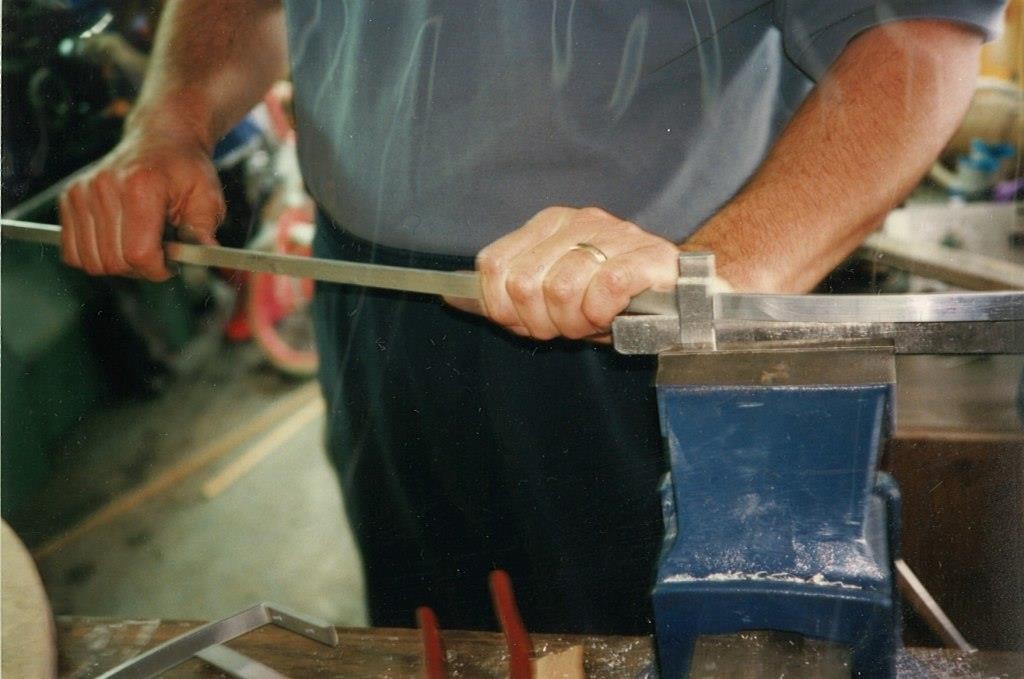 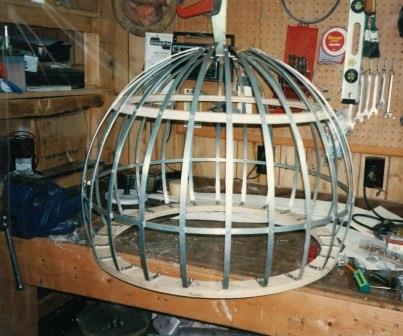 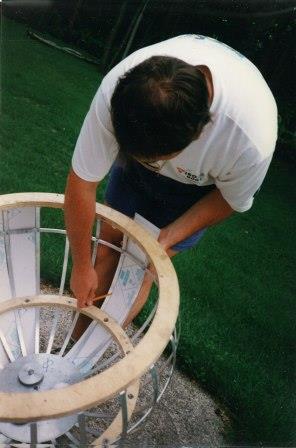 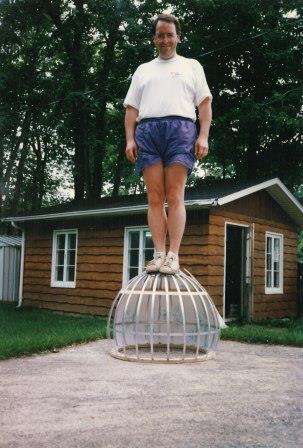 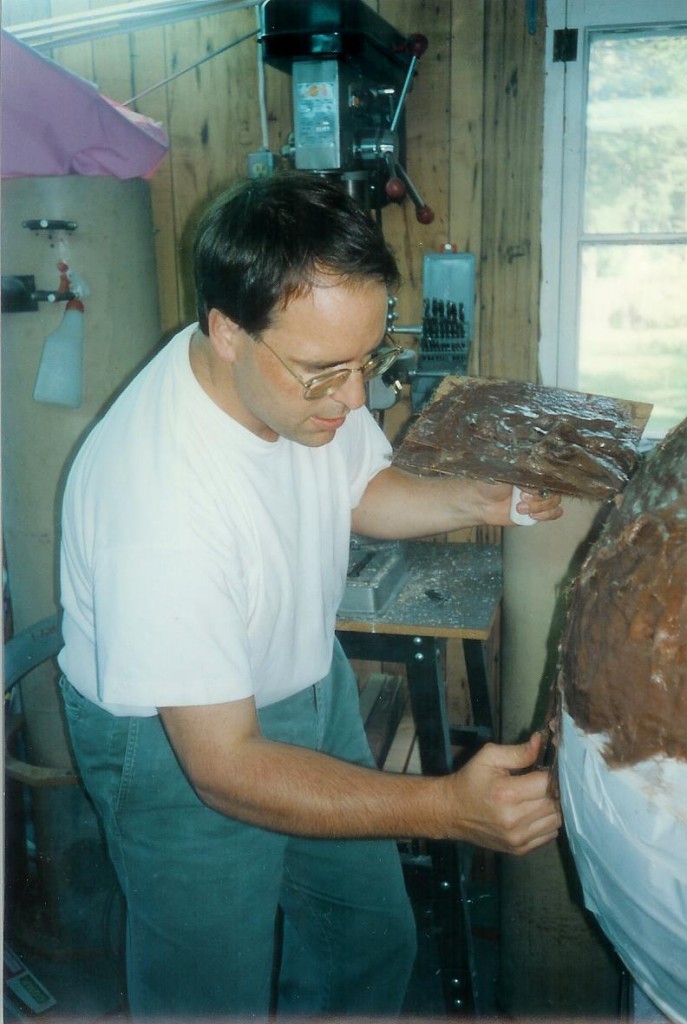 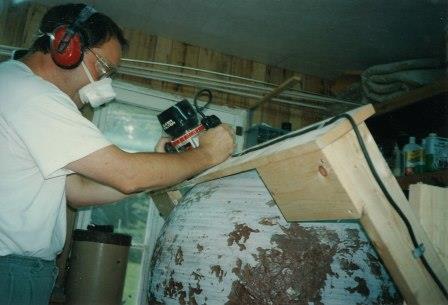 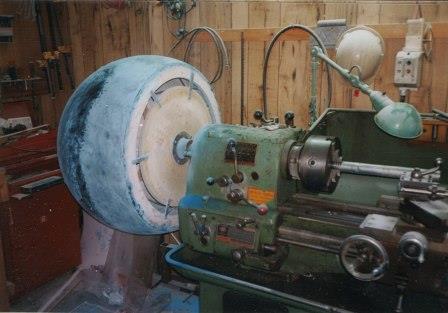 With the hemisphere slowly rotating in the lathe (about 30 RPM), I sanded with a small orbital hand sander. IMPORTANT SAFETY NOTICE: USE PROPER RESPIRATORY PROTECTION WHEN DOING THIS TO PROTECT FROM AIRBORNE PLASTIC AND GLASS FIBER DUST.

I don’t have pictures of the next operation but it consisted of applying generous amounts of fiberglass resin impregnated with a blue dye. After application the hemisphere was rotated by hand while the resin gelled (to prevent drips) and was left to dry. A little bit of sanding was done on the surface and another coat of blue dyed resin applied again. This was repeated for about 8 coats. After the last coat was applied, the hemisphere was sanded with the same orbital hand sander with finer and finer sandpaper (500 grit).

A few lessons were learned from this first hemisphere:

With these lessons in mind, I set out to find a better way to make a lighter and smoother surfaced hemisphere.  A few years would pass before I would come up with a better method.  Here, now, is a description of that improved technique.

Since the first hemisphere was much too heavy (80 pounds), I decided to make a second one using an improved, and simplified manufacturing method. The following describes this new method and can be reproduced by anyone with simple electric hand tools over a period of a few weekends.

Like my first, blue hemisphere, the second hemisphere is made of epoxy putty, impregnated with short glass strands. Here is a description of the manufacturing technique I used for my 30 inch ball scope:

Here is a sketch showing the overall setup before “milling” begins: 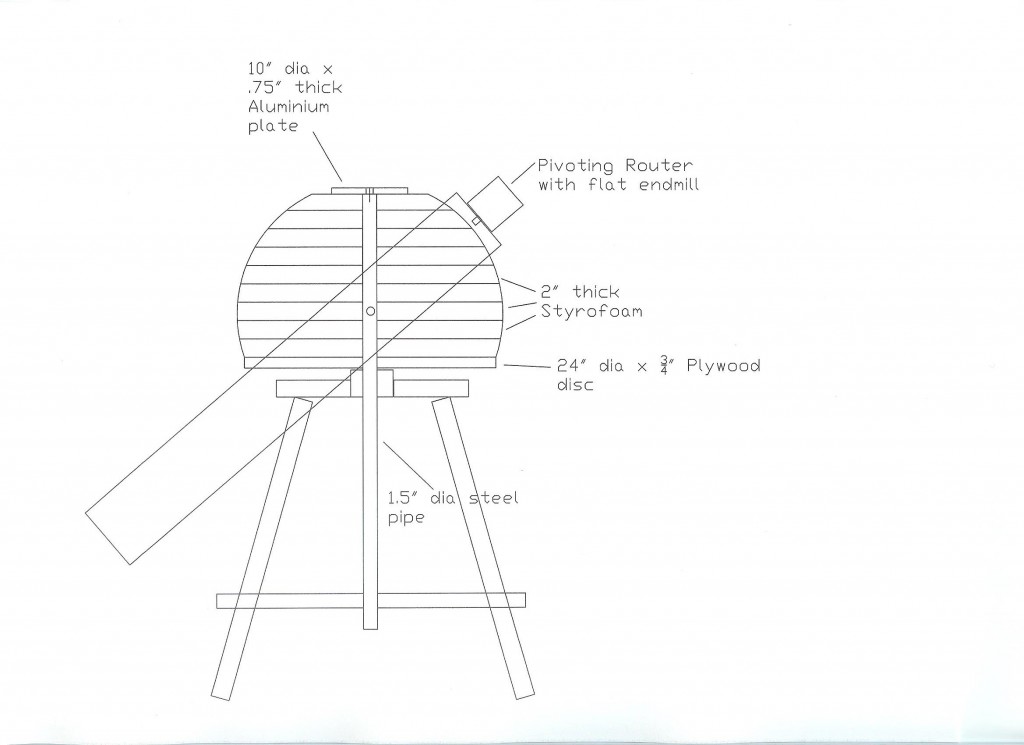 And a picture of the overall setup. As you can see, anyone can assemble such a jig to make any hemisphere, in any diameter: 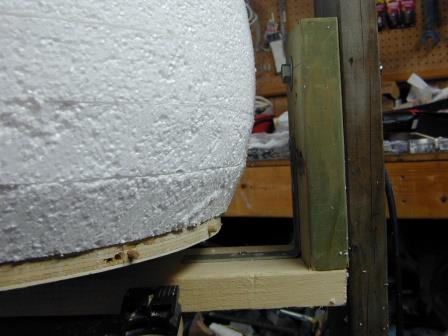 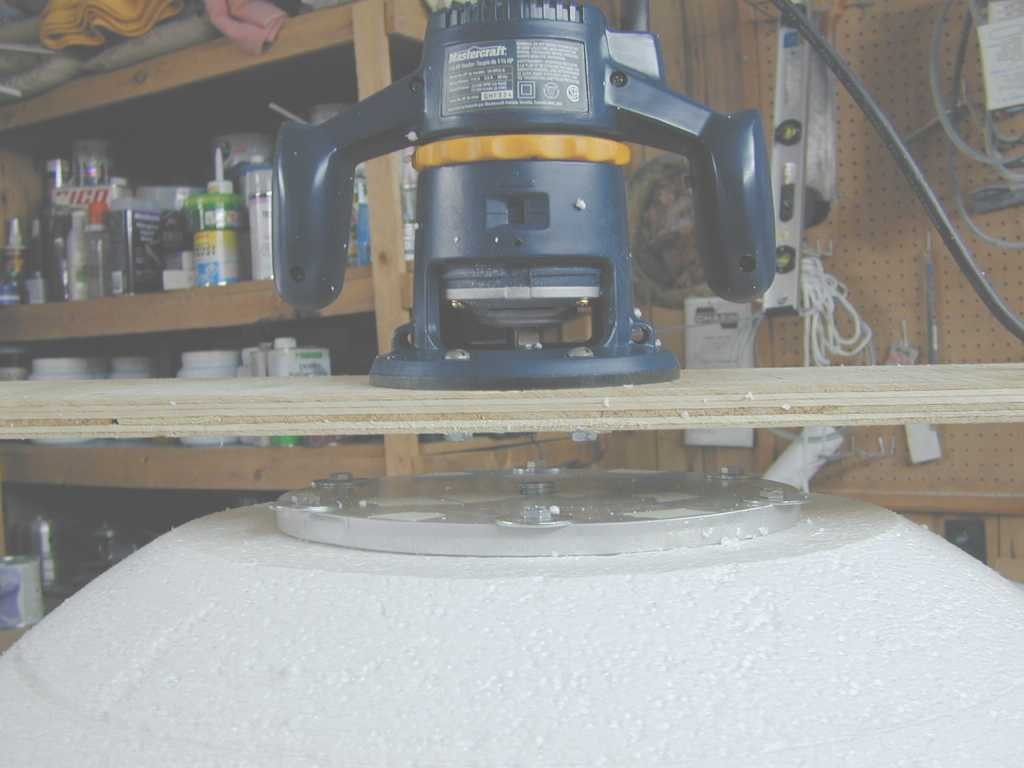 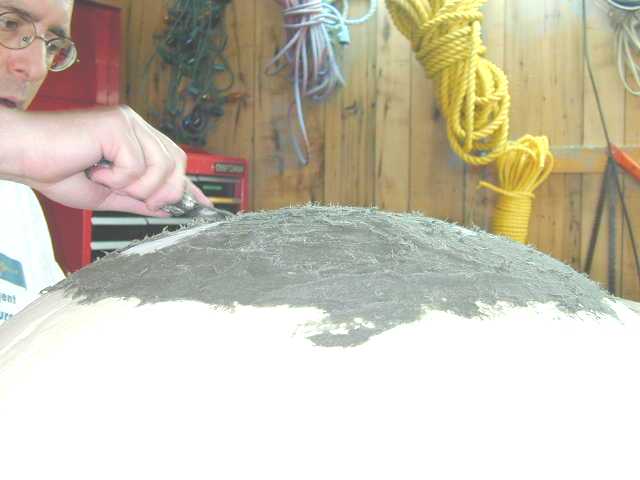 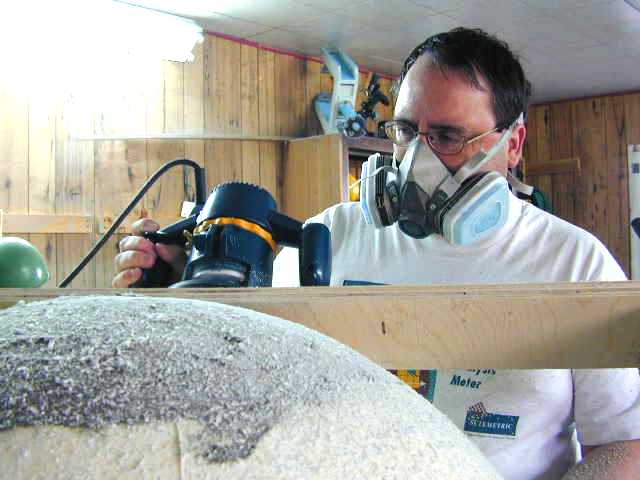 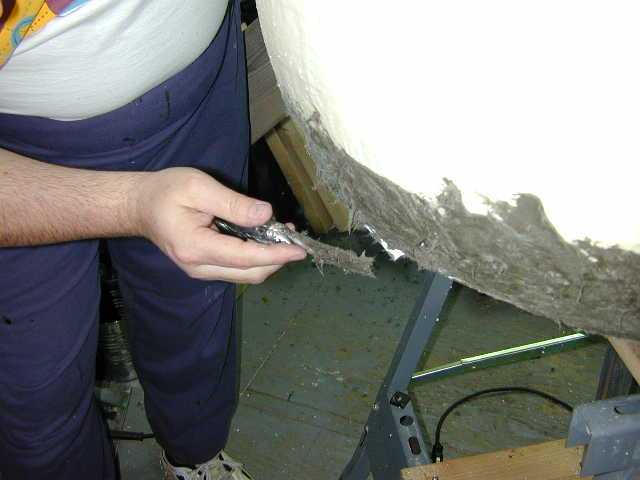 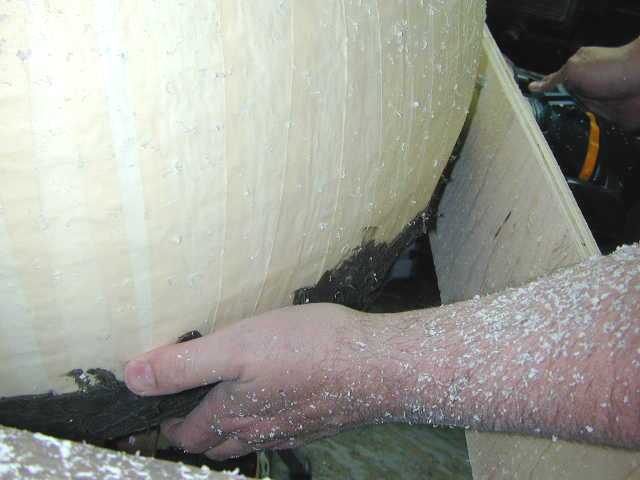 Sanding and Finishing of the Second Hemisphere

When putty had been applied everywhere and the router had made its final cut, I took the router and it’s pivoting support off and started sanding with a small, hand held electric sander. I first used rough sanding paper to remove the cut marks left by the router bit and progressed on to finer sandpaper grits.

You will remember from the first hemisphere that sanding with a standard orbital finishing hand sander, had resulted in small flats all over the hemisphere instead of a smooth curve. So, for fine sanding I made a new, backing plate with a 15 inch radius. I used some kind of nylon or acetal plate I had lying around in the shop but this could also be made with plywood. I used a radius bar in the lathe to cut the curve. This could be done in a wood lathe as well. I then attached this new backing plate to the sander, instead of the flat one it normally comes with. This way the sandpaper was conforming more to the radius of the sphere, creating a much smoother overall surface. Here is a picture of the electric sander I used and the special sanding plate that I can interchange by just unscrewing the four bolts in the center: 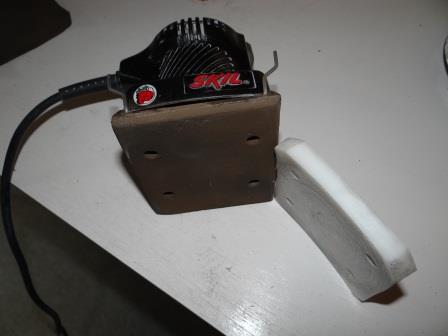 When fine sanding was complete I moved the sphere’s axis of rotation from a vertical to a horizontal position on the work bench. I placed a heavy weight at one end of the pipe (a heavy 4 jaw chuck I had lying around) to balance the weight of the hemisphere. I could still rotate the sphere but in a horizontal plane.  This way I could apply generous amounts of liquid epoxy resin impregnated with a grey dye (any color would do but for this new hemisphere I just happened to have that color on hand). After the epoxy was applied I would spin the hemisphere by hand until the epoxy started to gel (about 30 minutes), just like I had done on the lathe for the blue hemisphere. This spinning prevented the resin from flowing under gravity, dripping and creating hardened drops. I temporarily nailed four nails into the top plywood disc so I could have something to grab onto to spin the hemisphere. After a few hours the epoxy had fully polymerized: I sanded a few minutes to rough up the surface for the next coat and I would repeat the procedure.  I applied about 8 coats this way which created a smooth, thick epoxy surface. I did not need to paint and if the hemisphere is ever scratched I only need to sand again for repair.

I finished with finer and finer sandpaper (up to 500 grade) using the small orbital electric finishing sander with its curved plate support.  This fine sanding, by the way, was the most tedious and boring part of the project. I estimate I sanded for at least 20 hours to get the finish I wanted. I found the sandpaper I was using kept cloging up with resin dust and the paper had to be frequently changed. There must be better sandpapers than the ones I was using but I have limited experience working with fiberglass. In the end the sphere was very shiny and very smooth.

Here are a few photos showing the application of the coloured resin: 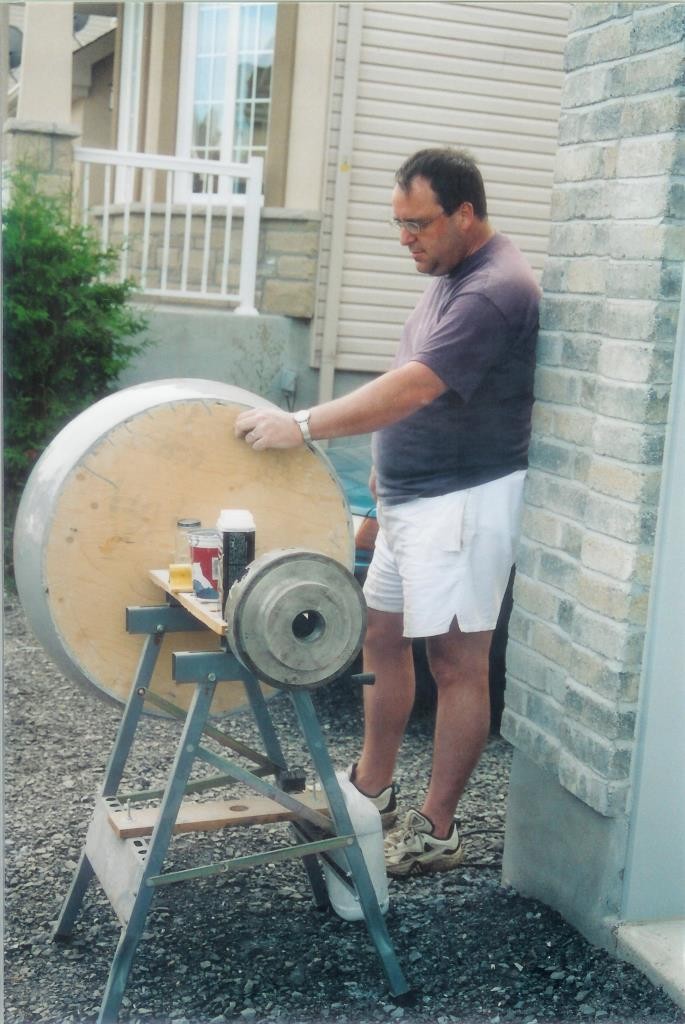 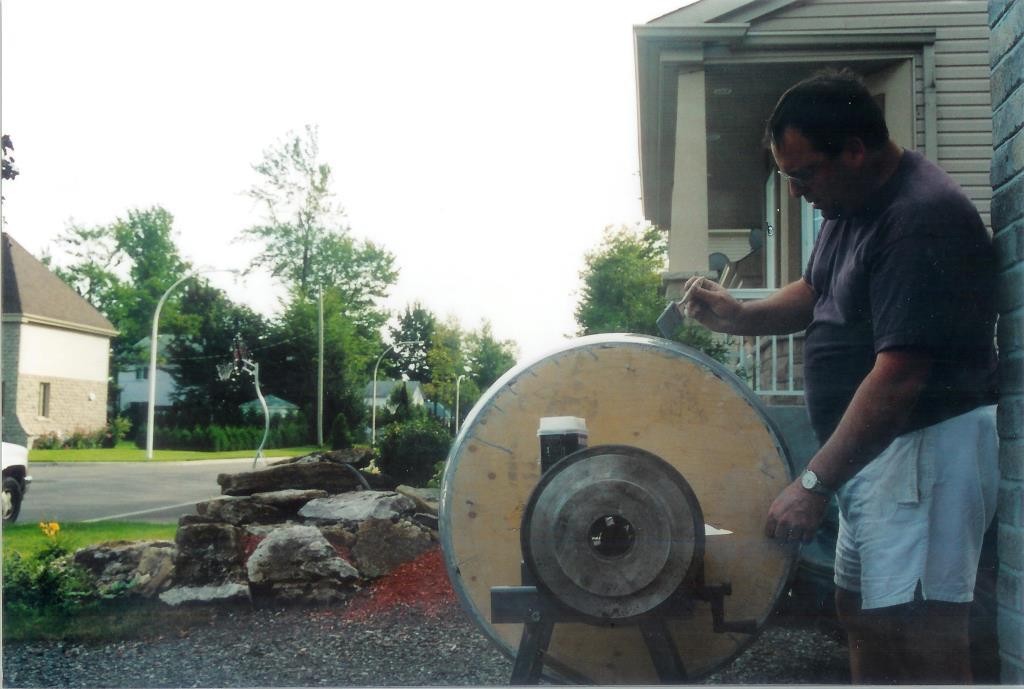 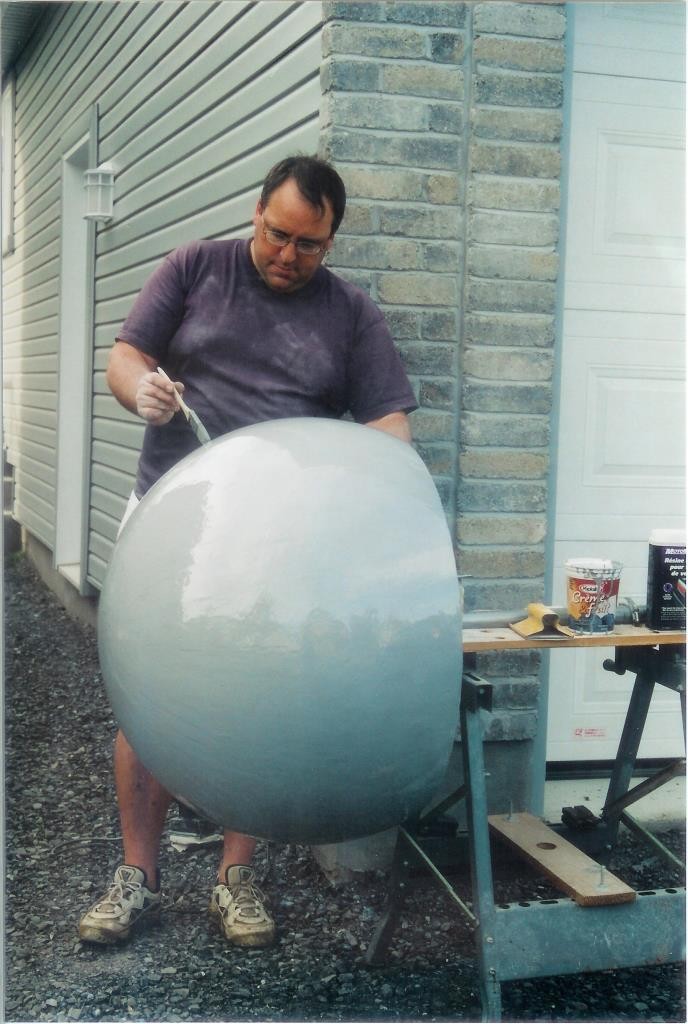 When I was satisfied with the surface finish of the dye impregnated epoxy resin, I removed the pipe and cut away all but a 2 inch wide ring from the central plywood disk. I did this with a hacksaw after drawing a cutting circle. 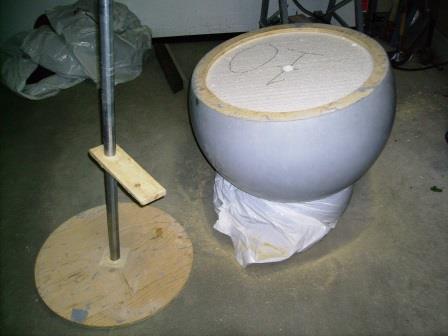 With the plywood disk now removed the Styrofoam core was exposed. I proceeded to extract the Styrofoam by cutting the slabs up in large, broken chunks and removing them (another messy operation). I was then left with a hollow, 3/16 inch thick hemisphere that now weighed only 40 pounds when empty. 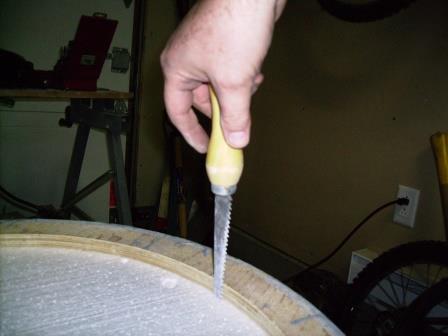 Forty pounds was much better than eighty pounds but made it impossible for me to attain the 75 pound OTA weight I was aiming for. Indeed a rough calculation indicated the following:

For a total of 101 pounds. I was getting closer to my 75 pound weight goal but would be unaible to reach it with this configuration. I had to find a way of reducing the overall weight by 25 pounds. But how? Find out here.